2000 Hummer H1 Wagon with 6.6 LBZ Duramax conversion with Billet ATS transmission. Tons of torque! The engine is completely stock with a fully built stage 5 ATS 6-speed transmission, which costs around $8k for just the transmission. Along with the LBZ swap the front suspension was rebuilt and new 37inch Toyo Open Country M/T tires were installed. The interior features leather seats and an upgraded sound system which is paired with a touch-screen head unit and Bluetooth audio and phone capabilities.

This Hummer H1 has 90,200 miles. The LBZ swap was done sometime in the last 10k miles, and was installed by Humbuilt at American Outfitters. This truck was previously sold by Hummercore, and they verified the previous ownership and the swap. It was previously owned by a body shop owner who had the entire truck repainted in its original color and redid all the trim. Hummercore stated it was one of the higher quality Duramax swaps that they have seen. The previous owner then had a 6-speed Billet ATS Allison LCT-1000 transmission installed in April of 2020 that was purchased directly from ATS with a 5-year 100k-mile warranty (unfortunately non-transferable, but it shows the quality of their product). The truck is in great condition but has been driven so there is normal wear and tear. It was just inspected had a coolant flush and the HVAC serviced. The truck has heat in the winter and A/C in the summer! Overall this is a fantastic H1 that is ready to go anywhere.

Specs on the trans here: 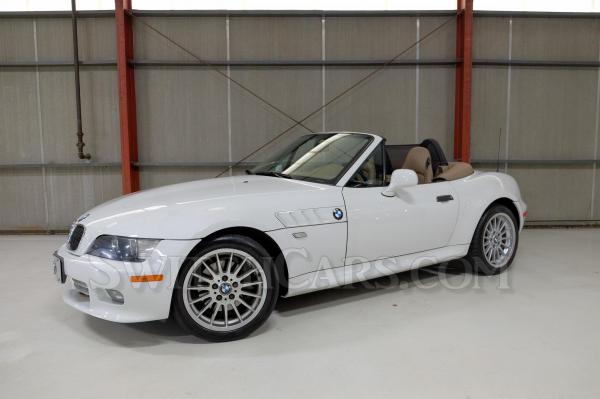 2001 BMW Z3 3.0i Roadster with just under 63k miles. This is a rare find finished in Alpine white over Tan interior with a Black convertible top. Automatic transmission with the desirable 3.0i engine. This Z3 is also equipped with the M-sport steering wheel and 17-inch wheels.

The exterior is in great shape for the age with minor imperfections on the wheels and a couple rocks chips. The interior is in great condition and shows very minimal wear.
The car will come with a rear wind deflector, Tonneau cover, 2 keys, and the original books. 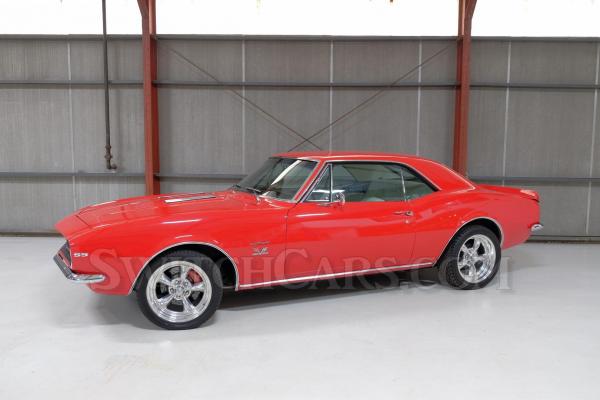 1967 Chevrolet Camaro Restomod now available! The power comes from a 427 engine with a 3-speed automatic transmission. The Camaro is an older restoration but has been upgraded throughout the years. The exterior is painted in bright Red and looks great. The paint has some imperfections which can be seen in the photos. The black/white interior is in great shape. The bucket seats, dash, door cards, and headliner all show very nicely. The interior features a 3-spoke steering wheel, AutoMeter gauges, B&M shifter, and a kenwood radio.

In the engine bay the motor features a Holly carburetor, Performance RPM intake, MSD Ignition, Mishimoto aluminum radiator with electric fan, and Flowmaster exhaust system. The suspension has also been upgraded with Bilstein shocks tuned by Hotchkis, Hotchkis sway bars and end links, and Hotchkis tie rods. The brakes are Wilwood 6 piston disc brakes in the front and rear drum brakes. The wheels are 17inch Eagle Alloys with 255/40/17 tires in the rear and 245/40/17 tires in the front.

Overall this is a very nice running and driving 1967 Camaro restomod with lots of great upgrades. The odometer shows 176 miles, actual mileage is unknown. 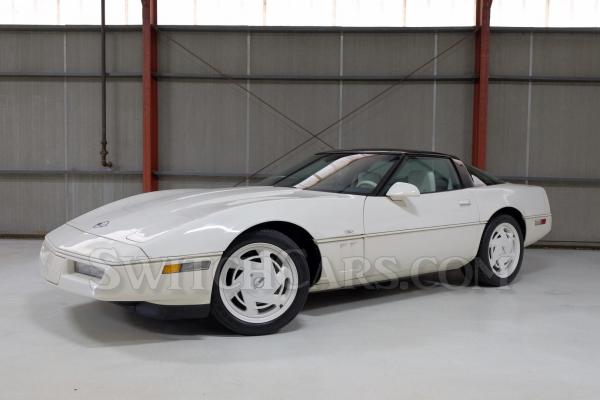 35th Anniversary Edition 1988 Chevrolet Corvette, with a 4-speed manual transmission and 17,530 original miles. This car is #0764 of just 2,050 35th anniversary editions produced, and under 200 of those had manual transmissions. The anniversary edition comes in triple white, white exterior, white wheels, and white interior. The exterior of the car is in great condition, the car looks almost new. The pop up headlights work flawlessly. The engine bay and suspension components are very clean. The interior is also in great condition, the seats and steering wheel look fantastic. Everything works in the interior. This car has been lightly driven and very well taken care of. This is one of the most sought after C4 Corvettes. 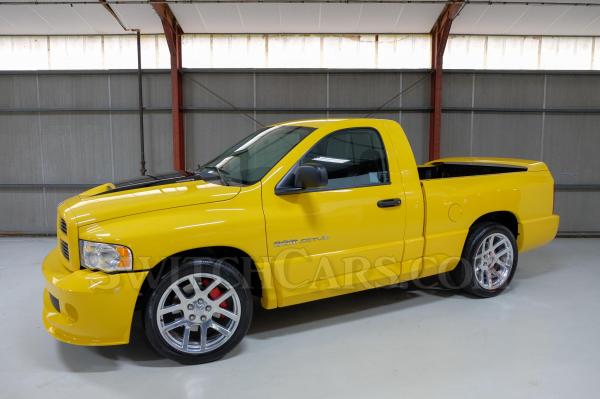 *SALE PENDING* 2005 Dodge Ram SRT-10 Yellow Fever Edition with only 394 original miles! This truck is 1 of only 200 regular cab Yellow Fever trucks made in 2005. It is finished in Solar Yellow over Dark Gray Slate leather with yellow stitching. Powered by a 8.3-liter V10 Viper motor mated to a six-speed manual transmission. The factory options list displayed in the glove box includes 6-speed manual, 4.56 axle ratio, Dana M60 axle, and limited slip differential.
This SRT-10 Ram is in exceptional condition as it should be with under 400 miles. The paint is in great condition with only one imperfection on the roof (pictured). The interior is in perfect condition with no flaws to note. The underside is in great shape with no rust. The truck is original with no modifications. The tires are original.
The Carfax is clean with no accidents or damage reported and shows 2 owners. The first owner had it from new until 2021. This example is number 165 of 500 ‘Yellow Fever’ edition SRT-10s produced. It comes with the original books/manuals, 2 keys, and kit for rear wing removal. 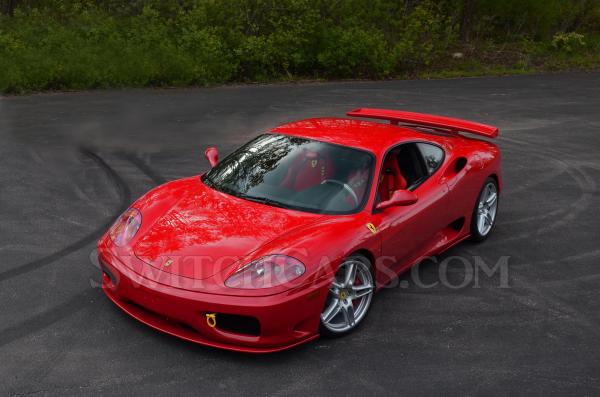 Novitec Rosso is a well-known German tuning company that many of us may remember from our childhood or teenage years. They weren't as outlandish as Gemballa or Koenig, but they produced some fantastic products and continue to put out quality upgrades to this day. Likely the most memorable Novitec kit is from the Ferrari 360, and even if you haven't seen one with the full aero treatment, you've likely seen their gorgeous split 5-spoke wheels on a number of 360s or F430s.

This particular 360 left the factory in 1999 as a US-spec gated-manual coupe, and was delivered to its first owner in NJ, who kept it for just a year before reselling it with only 254 miles (likely for an immense profit, as they were selling for massive premiums over MSRP at the time). The second owner completed the Novitec upgrades circa 2004 and kept it until selling it to Switchcars in early 2021. We shipped it straight to Fast Cars, LTD, a highly-respected independent Ferrari service center in California, to have it fully serviced and comprehensively inspected, including a complete major service, compression test, and a through decontamination from long-term storage. We then installed new Michelin Pilot Super Sport tires, and proceeded to drive the car for a few hundred miles to not only enjoy the wonders of the Novitec upgrades, but also to make sure it was fully sorted post-service. The car performs amazingly well, and one would have no idea that the upgrades weren't factory. The superchargers add much-needed torque that is lacking in the stock configuration, and the entire tuning package works together seamlessly.

The car has a clean Carfax, no indication of damage or paintwork, although we just had the front bumper refinished to remedy the front license plate holes.The condition outside and inside is excellent, with no dash shrinkage, no sticky buttons, and no appreciable wear - it looks like a 6000-mile car.

This particular car has a Novitec data plate indicating it is #009, although it is only engine #006, so it is likely one of only a small handful with the entire kit, and it may be the only one in a manual. We have searched the internet high and low and cannot find another one, or history of any other one, that is a manual coupe with the twin superchargers. We've found one spider, the F1 press/demo car, and a handful of cars with just the wheels or body kit.

This gated 360 appears to have the complete upgrade kit from Novitec with no box left un-checked, including the following:

Here's an exerpt of a good write-up on the Novitec 360 from Motor Trend:

The added power measurably reduced acceleration times, but the F1 gearbox proved tricky to launch. As with every Modena F1 we've tested, you can't choose a specific launch rpm nor have the ability to feather the clutch; the result is a fine line between engine bog or wild tire spin. The Novitec's rear tires can generate enough smoke to amaze pyrotechnics experts. It looks cool, but it's not the way to quick times. Thus, a bog-and-go launch was used, which delivered a three-tenths-quicker quarter mile. We feel that with a true six-speed manual we could have generated a high 11-second [elapsed time].

If the Modena's stock Brembo-sourced brakes aren't good enough for you, then consider a set of Novitec's 380mm rotors clamped by eight-piston calipers. This $12,499 combination proves rock-solid and easy to modulate....Novitec suggests its lightweight 19x9.0/19x12.5-inch Rosso II center-locking wheels with Pirelli P Zero Rosso tires ($9300). Also in the name of more grip, Novitec offers its three-way-adjustable coil-over suspension ($7699) and custom anti-roll bars ($1999). In our slalom test, the rolling stock and suspension hardware teamed to deliver a more predictable Modena with an impressive 1.5-mph increase in average speed. On the street, the suspension proves friendly on all but the roughest of surfaces.

Why not designer threads, too? Body/aero mods include front bumper, side panels, rear diffuser, rear wing, carbon rear grille, and taillights ($17,394). Inside upgrades are carbon-fiber and include a center console, radio cover, instrument panel, door panels, and door-sill plates ($6144). Enjoying all these prancing horses requires an intercooled checkbook, as the F360's tally of upgrades rings in at over $100 grand. 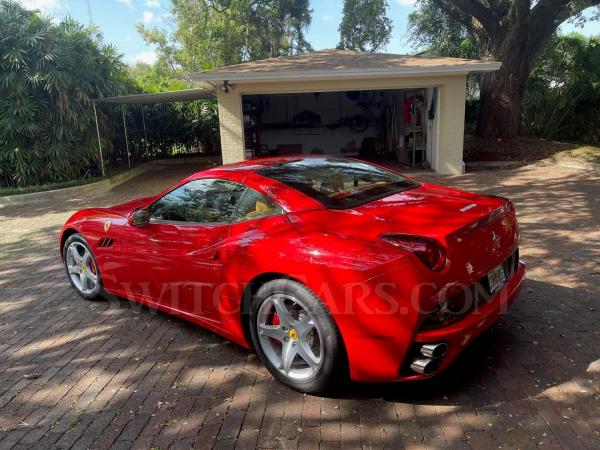 We have just received this beautiful 2014 Ferrari California from the original owner with incredibly low mileage. More photos and info coming soon - inquire within!

2005 Honda S2000 with just under 119k miles. This S2K is finished in red over black leather and is powered by a 2.2-liter F22C VTEC inline-four paired with a six-speed manual transmission. Clean Carfax with no accidents or damage reported. All 10 vin tags are present. Everything functions properly with no issues. Invidia test pipe is installed and the factory cat is included. Comes with 2 keys. 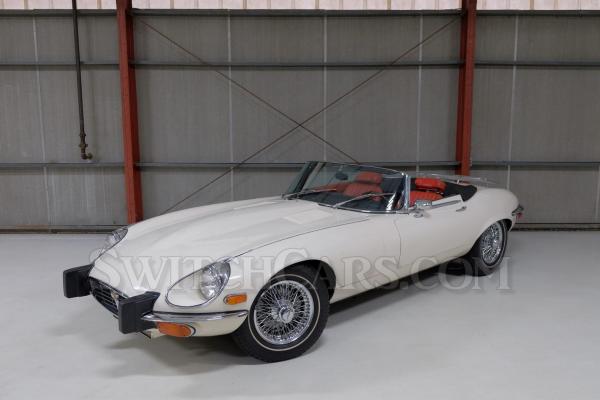 Offered at NO RESERVE via Bring a Trailer is this 1974 Jaguar E-type V12 which we purchased locally from its owner of over 30 years. Prior to his ownership, this Jaguar was owned since 1976 by a friend and fellow local business owner right here in Twinsburg. The car is incredibly original and sports the rare factory hardtop along with all manuals, plus documentation including the original registration card and a Jaguar Heritage Trust Certificate. Check the link below to bid - this car IS SELLING via the auction, closing Tuesday, September 28th. 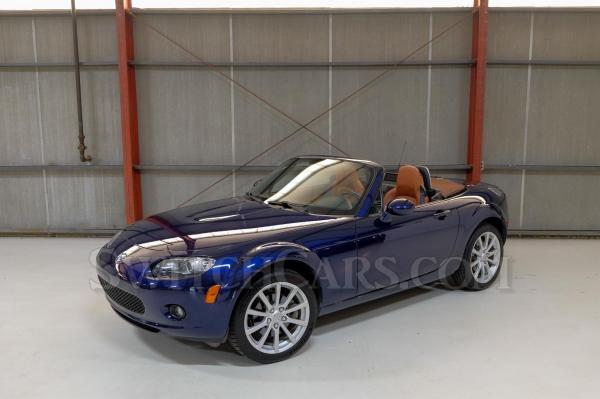